Coming in here one morning where it seemed like the arctic winds were blasting and chilling me to the bones, was such a sigh of relief when entering this warm converted fire station. The nice high ceilings and huge open windows that let whatever dwindling sun in made it such a cosy rustic almost cafeteria vibe. I couldn’t see any fire men poles around but it seems like having the 50’s style tables are substandard these days for eclectic alternative cafe establishments like this.

I’m a big fan of hash browns and was dying to have some since the previous place I had no patience for but might go back when I’m not impatiently bratty. As soon as I walked into the place, I could smell them straight away so I plonked myself down and trawled through the mains and had a little squeal when I read under the Extras: Hash browns $2.

I got Egg Salmon which consisted of a very simple dish of 2 poached eggs on top of 2 muffins topped with Hollandaise sauce which was on the verge of splitting but that’s ok because it tasted alright and I was so damn hungry I didn’t give a rats arse on if my food was presented by some food artiste. I didn’t even give a toss that some chopped up parsley was thrown on the side. All I cared about was how wonderfully done my hash browns were. I was so happy to see them and they were better than the ones that you get at some places which seem like they are half cooked. Serving them on those oval diner plates were kinda amusing and I had to give up my muffins to my compadres.

There was a dish called “The King” ($12.90) which consisted of a fried peanut butter and banana sandwich served with bacon and honey. I got a tinge of jealousy because it was an Elvis dish and that Olleh was eating it in front of me. I wish they made a gluten and sugar free version but that would miss the point totally. 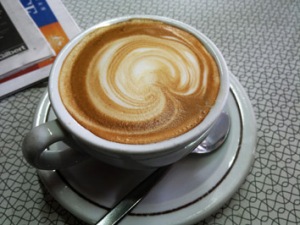 Food: $13.90 Simple, well drained of excess oil, decent hollandaise but needed to be a bit more generous with the salmon. The hash browns were the best. I liked them very crunchy that they can take on the warm yolk and sauce without falling to bits within seconds. But not too hard that I need to karate chop (Elvis style, mind you) to get at them.

Bonus points for the high ceilings, friendly staff, the warm warm cosy atmosphere, the fat toad like woman statue with a fire man’s hat squatting at the front counter.

Chance of returning: Low-Medium, only because of it’s location. I really want to tackle “The King” without having painful stomach repercussions. But if I lived in the area, that would have to be a place that I would visit often.